OFFICE RESOURCES TO HELP YOU GET PATIENTS STARTED ON COSENTYX

These kits provide you with information and sample letters that guide you through communications with health plans to make sure the prior authorization or appeal process is as complete as possible. The insurance materials will help answer any questions you may have regarding medical exceptions and formulary changes. 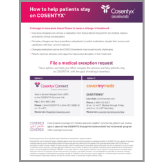 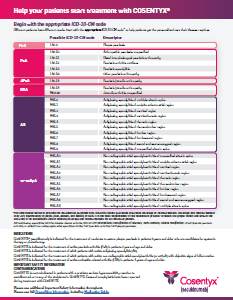 Details of services and processes of the COSENTYX Connect Hub and a list of resources to use should you have any questions.

Details of services and processes of Specialty Pharmacies and a contact list to use should you need to reach out.

Getting Started With CoverMyMeds

Details about how to use CoverMyMeds to start patients on COSENTYX, plus account, training and support resources.

Start patients on COSENTYX and simultaneously enroll them in the COSENTYX Connect Personal Support Program. Includes a prepopulated SRF sample form on the last page.

Direction on how patients can sign their SRF electronically and provide authorization to have it processed.

Information that will help you prepare patients to use the Sensoready® pen.

An overview of the offerings available through the COSENTYX Connect Personal Support Program and the medication refill and tracking resources via the Medisafe app.

COSENTYX® (secukinumab) is indicated for the treatment of moderate to severe plaque psoriasis in adult patients who are candidates for systemic therapy or phototherapy.

COSENTYX® (secukinumab) is indicated for the treatment of moderate to severe plaque psoriasis in patients 6 years and older who are candidates for systemic therapy or phototherapy.

COSENTYX is indicated for the treatment of adult patients with active psoriatic arthritis.

COSENTYX is indicated for the treatment of adult patients with active ankylosing spondylitis.

COSENTYX is indicated for the treatment of adult patients with active non-radiographic axial spondyloarthritis (nr-axSpA) with objective signs of inflammation.

COSENTYX is contraindicated in patients with a previous serious hypersensitivity reaction to secukinumab or to any of the excipients in COSENTYX. Cases of anaphylaxis have been reported during treatment with COSENTYX.

COSENTYX may increase the risk of infections. In clinical trials, a higher rate of infections was observed in COSENTYX treated subjects compared to placebo-treated subjects. In placebo-controlled clinical trials in subjects with moderate to severe plaque psoriasis, higher rates of common infections, such as nasopharyngitis (11.4% versus 8.6%), upper respiratory tract infection (2.5% versus 0.7%) and mucocutaneous infections with candida (1.2% versus 0.3%) were observed with COSENTYX compared with placebo. A similar increase in risk of infection was seen in placebo-controlled trials in subjects with psoriatic arthritis, ankylosing spondylitis and non-radiographic axial spondyloarthritis. The incidence of some types of infections appeared to be dose-dependent in clinical studies. In the postmarketing setting, serious and some fatal infections have been reported in patients receiving COSENTYX.

Exercise caution when considering the use of COSENTYX in patients with a chronic infection or a history of recurrent infection.

Instruct patients to seek medical advice if signs or symptoms suggestive of an infection occur. If a patient develops a serious infection, monitor the patient closely and discontinue COSENTYX until the infection resolves.

Evaluate patients for tuberculosis (TB) infection prior to initiating treatment with COSENTYX. Avoid administration of COSENTYX to patients with active TB infection. Initiate treatment of latent TB prior to administering COSENTYX. Consider anti-TB therapy prior to initiation of COSENTYX in patients with a past history of latent or active TB in whom an adequate course of treatment cannot be confirmed. Monitor patients closely for signs and symptoms of active TB during and after treatment.

Caution should be used when prescribing COSENTYX to patients with inflammatory bowel disease. Exacerbations, in some cases serious, occurred in COSENTYX treated subjects during clinical trials in plaque psoriasis, psoriatic arthritis, ankylosing spondylitis and non-radiographic axial spondyloarthritis. In addition, new onset inflammatory bowel disease cases occurred in clinical trials with COSENTYX. In an exploratory trial in 59 subjects with active Crohn’s disease, there were trends toward greater disease activity and increased adverse events in the secukinumab group as compared to the placebo group. Patients who are treated with COSENTYX should be monitored for signs and symptoms of inflammatory bowel disease.

Anaphylaxis and cases of urticaria occurred in COSENTYX treated subjects in clinical trials. If an anaphylactic or other serious allergic reaction occurs, administration of COSENTYX should be discontinued immediately and appropriate therapy initiated.

Non-live vaccinations received during a course of COSENTYX may not elicit an immune response sufficient to prevent disease.